My first understanding of lean can be traced back to a specific six hours early in my career spent helping my plant manager, Gifford Brown, prepare a presentation to a group of suppliers.

I had recently transitioned into the training department and had been teaching many of the lean tools classes that we offered to all employees.  My supervisor and I were called to Gifford’s office and he started the conversation by indicating that he needed our help in capturing his thoughts to prepare  the presentation, but before he turned us loose, he  first wanted to educate us on the finer points of lean.  My supervisor and I looked at each other hesitantly (after all, we were already teaching this stuff, what more could we learn?).  For the next three hours, Gifford methodically explained lean to us.

He started with the concept of leadership expecting excellence from employees by empowering them with systems and tools that supported their desire to improve their own work.  He explained the cultural aspects of lean that are necessary before the tools can be effective.   He linked all of the lean tools into a systems perspective describing how they all interacted with and were dependent upon each other.   This was pretty standard stuff that we had been teaching already as part of our overview of the Cleveland Production System, the forerunner to the modern Ford Production System.

What was different though was that Gifford went on to explain that there was no prioritization to the implementation of the tools.  The starting point for implementation was first trusting, then involving employees, who would start to pull the tools they needed as they sought ways to improve their work processes.

The layout of the refurbished Cleveland Engine Plant 2 had been worked on for months to maximize the flow of materials and minimize waste.  Gifford started to explain how the departments were laid out to support principles such as respect for people, flow, just-in-time, and value to the customer.  Once the layout was maximized, a visual management system and a total productive maintenance philosophy was incorportated in equipment design to support  quick changeovers, level production schedules and minimum in-process inventory.  A zero defects mindset was established, where standard work was developed by the front-line workers and workplace organization was established through on-going 5s activities with all employees.  Visual management systems highlighted abnormalities, PDCA problem-solving techniques were utilized by teams to address abnormalities and error-proofing devices were developed to address root causes of problems and eliminate or correct the errors that were leading to defects.

We had been teaching the tools all along.  Gifford was now presenting the overall system in a  fashion that didn’t stress one tool at the expense of another. Instead it was implement the tool that was most needed to continue the implementation of another tool at a higher level.  Start and go as far as you can until you realize that you need something else in order to continue to improve.  Your expectations and how you address abnormalities along the way will lead you to where you want to go.  So when setting expectations, leaders should Expect Excellence!

I took pages of notes and walked out of the discussion with my head spinning – it made so much sense.  I put together a presentation that tried to capture all that I had heard and then one week later, spent three more hours with Gifford editing and refining the presentation.

The slide on leadership expectations  had a diamond clipart picture with the words “Expect Excellence” on it. 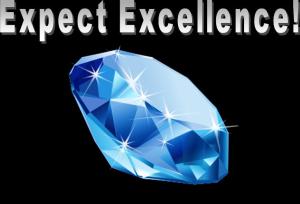 It has served as a continual reminder to me when trying to teach the principles of lean leadership.

This entry was posted on July 24, 2011, 7:23 pm and is filed under Lean Principles, Shingo, Systems, Tools. You can follow any responses to this entry through RSS 2.0. You can leave a response, or trackback from your own site.