The U.S. Air Force Thunderbirds and other high-performance teams.

As I sat working in my office, my attention was diverted by the sights and sounds of the Air Force Thunderbirds practicing for this weekend’s National Air Show in Cleveland.

From the Press Release announcing their performance,

“The six select Thunderbird pilots will put their distinct red, white and blue F-16 Falcon jet fighters through a choreographed hour-long performance each day at speeds up to 500 mph and as close as three feet from each other. The Thunderbirds are the U.S. Air Force “Ambassadors in Blue” and represent the United States at approximately 35 sites both home and abroad each year.

The Cleveland National Air Show is a Labor Day Weekend family tradition and one of the largest annual events on the North Coast.

Watching these planes maneuver around the buildings of downtown Cleveland and out over Lake Erie inspires awe at the union of pilots, planes and teamwork.  To hear their sound and feel their power as windows and ground shake demands your attention and respect.

I had the good fortune of being a member of the Shingo Prize Site visit team in 1999 that visited the Lockheed-Martin manufacturing facility in Fort Worth, TX where the F-16 Falcon jets come to life.  It was a treat to observe the interaction of design engineers, process engineers and assembly line workers transform a bunch of metal, wires and other assorted parts into a finished jet fighter as it traveled down a one-mile long assembly line.

Not only was the facility a great place to see, but the team of examiners gathered to assess the organization was one of the best I’ve had the pleasure of working with.  The team’s co-leaders were George Koenigsaeker, a 2010 inductee into Industry Week’s Manufacturing Hall of Fame and Ross Robson, former Executive Director of the Shingo Prize and Shingo Prize Academy member.  Also on the team was Larry Anderson, Lean Gold Certified, past Chairman and co-member with me on the AME/ASQ/Shingo Prize/SME Lean Certification Oversight and Appeals committee.  It was truly a high performance team and quite a learning experience for me. 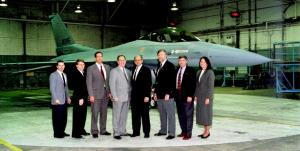 Describing teamwork is a lot like defining quality.  The statement “I know it when I see it” applies.  However, it doesn’t go deep enough to fully understand the work and dedication required behind the scenes to make the visible product satisfying to both customer and team member.

Achieving, then maintaining high performance is hard work and comes with few shortcuts.   Members of high-performance teams receive their reward from the purpose of their work, the satisfaction from their interactions with each other,  and ultimately the outcome of their dedication.

This entry was posted on September 2, 2011, 9:17 pm and is filed under Shingo, Teamwork. You can follow any responses to this entry through RSS 2.0. You can leave a response, or trackback from your own site.